How to do a frontside 180 on a skateboard

How to do a frontside 180 on a skateboard

The frontside 180 is a well-known skateboarding move that may be applied in a variety of situations.

The skater gets into the air and lands with the board and body laterally, i.e. backward, similar to an ollie with an additional half-rotation.

It’s an intermediate-level skating maneuver that’s so easy it could be the sport’s first move.

Per Welinder writes in his book “Mastering Skateboarding” that “some skaters find that frontside ollies are actually easier than straight ones.”

“This is presumably due to the fact that these folks jump by twisting their bodies.”

“When it comes to learning a new trick, this is a good thing.

If your body gets used to one method of practicing ollies, it can be tough to switch to another.”

The frontside 180 is extremely similar to the ollie in terms of foot position.

The tail and the rear foot are responsible for much of the trick’s movement.

Make sure your heel is dangling off the edge of the deck at a 30-45 degree angle from the front bolts.

The toe ball of your rear foot should be on the tail’s edge, with the heel pointing up slightly.

Getting a solid ollie and starting a half-rotation are the last two remaining steps.

You should keep in mind that there are numerous slight modifications to the trick.

Beginners will benefit from some of these, while intermediate and advanced riders may find them interesting. 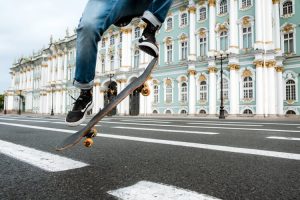 In order to do a frontside 180 without stumbling, follow these steps on level ground.

1.Start rolling at a reasonable speed and assume the ollie position;

2.As you lower your arms, be sure that the lead shoulder is facing slightly toward the toes;

3.Use your ankle to pop up the board, rather than your leg;

4.Untwist your upper body as you begin your ollie;

6.Your shoulders should face ahead, and the skateboard should point in the direction you’re going, at the highest point of your ollie.

7.Make sure you keep your eyes focused on the goal.

8.Your lower body will begin a lateral rotation with your head and shoulders as the board begins to turn.

9.Put pressure on the board with your front foot to bring it level with the ground.

10.Roll away as soon as all four wheels touch the ground at the same time. 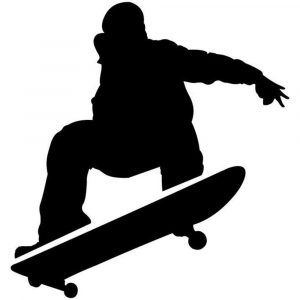 Practice your first frontside 180s on a bank to speed up the learning process.

The upper body motion will be ingrained in your muscle memory through repetition.

A strong, confident, and high ollie is essential to a solid performance.

In order to hold the board close to your feet and avoid falling backward after landing, put extra weight on your toes.

While getting ready to ollie, if you can’t make the skateboard to turn 180 degrees, try twisting your body further.

It could also assist in landing the front wheels first and pivoting around before the tail touches the ground and completes the halfway revolution.

As a result, it’s akin to putting the car in drive before turning 180 degrees.

Finally, a pop shove-it can be used in place of the ollie.

However, it will not be the original frontside 180, but it could serve as an excellent stepping stone to perfecting the feat in the long run

How Fast Do Hoverboards Go?